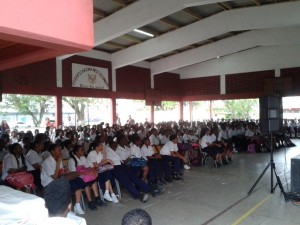 Wrecking Ball Press have teamed up with The Roundhouse and the BBC in a global project that will see Hull performance poet Joe Hakim travel to Trinidad & Tobago. Talking Doorsteps is for spoken word artists aged 16-25yrs and offers an accessible and interactive physical and digital community to share and platform work centered on the theme of HOME. Starting from next week, Joe will be observing and participating in workshops with young Caribbean poets before returning home and working with young Hull poets, then bringing the two artistic communities together for a performance in September as part of the “Contains Strong Language” Poetry Festival, which will be programmed by the BBC and Wrecking Ball Press. Joe will be writing daily blog entries so we can follow his progress. Here’s the fourth instalment:

At this point I have to give a couple of shout-outs to some great people.

Marcia Guerrera at the Cafe Mariposa is amazing. Not only does she cook for us, clean up after us and serenade us at breakfast, but she is also a font of local knowledge. She’s able to point at a bird and tell you what species it is. She can give you a quick rundown about local history, give you practical advice about what to do and where to go to get whatever you may need, and she’s just a wonderful human being who welcomed us with open arms.

I’d also like to thank Ariana. Not only is she participating in the workshops and working full-time, but she’s also made time to ferry us about as well. Plus, her Dad gave me a lesson in how to dance. She’s a truly beautiful person, and she has a truly beautiful family.

So today, Monday (I think it’s Monday… yeah Monday … turns out jet-lag makes you as confused about the days of the week as Christmas) marked our first trip into a Trinidad school. This was something that I was particularly nervous about. Late last year, my friends and partners in crime LIFE invited me to tag along and perform with them on a few dates on the UK leg of their European tour. But the nerves I experienced getting ready to go on stage at the Shepherd’s Bush Empire paled in comparison to what I felt as we rolled up to the gates of the San Fernando Secondary School. Luckily, I was with Debris, whose professionalism and experience in these situations worked wonders as a calming influence. Debris Stevenson exudes and transmits energy and has that rare ability to influence an environment just by being present within it. When someone has travelled to and performed in 23 different countries, you just know that they have something special to give and that they’re prepared for every eventuality.

I don’t know exactly why I find performing in front of kids so nerve-wracking. I think it has to do with the fact that I credit kids and young people with having extraordinarily well-tuned bullshit detectors. You can’t blag it, because they’ll sniff out insincerity the same way a pig sniffs out a truffle.

Jean Claude, our man in Trinidad, the 2 Cents guru, and the guy who set up our school appearances, led us into the hallway. We were set to perform in front of the school’s spoken word club (yeah, a spoken word club – how amazing is that?) so we took to the stage. As I said earlier, Debris has worked in situations similar to this all over the world, so I watched her intently. One of the big concerns that I had with this trip was how my work, and more importantly my accent, would carry over to an international audience. Beyond slowing down my delivery a little, I was really worried about the audience just not getting it. I mean, people from other parts of the UK sometimes struggle to fathom out the Hull accent – how the hell would a group of kids from Trinidad manage? Debris assured me that the secret to successfully communicating to an international audience isn’t actually that big a secret; just be honest, tell them who are you are, what you’re about and where you’re coming from, both geographically and in terms of your work.

I decided that the best approach was to confront the accent anxiety head-on. And I’m so glad that I did. Hearing a group of Trinidad school kids repeat: “Er ner, there’s sner on the rerd,” as a means of acclimatising to my accent is one of the highlights – if not the highlight – of my spoken word career. It was beautiful. And once again, I had this wave of emotion hit me. I’m a horribly repressed working-class bloke from Yorkshire – just what the hell was Trinidad doing to me?

After the school performance was over we headed back to Cafe Mariposa for the second workshop session with the 2 Cents group. Today’s session was focusing on editing techniques. The workshop was designed as both a means to give the participants a set of tools to carry into their practise beyond the workshops, but also as an exercise to get them working on the poems that Pip would be filming as part of the Talking Doorsteps project. Speaking to the participants, I got the impression that they were all particularly looking forward to this phase of the process, so there was a real buzz in the air.

Debris started the session by placing different prompts on all the tables. The prompts were focused on different aspects of the editing process, things like: What are the specifics of what you’re trying to say? How are you using verbs? How do the nouns affect the poem? What are you trying to communicate to the audience?

We drifted around the room in loose groups, discussing the prompts with each other before reconvening in a circle. We did an exercise where we moved to different parts of the room depending on how we felt about the editing process. One side of the room was “extremely dislike”, the other side “really like”. And then we did the same again, but this time addressing how we felt about others doing it, and then again about how we felt about editing other people’s work. We were then set the task of coming up with three things that we wanted to achieve/communicate with our poems.

After this wrapped up, Debris began to discuss redundancies in poetry. She handed around copies of a Simon Armitage poem, which had been re-edited to include superfluous words, and in groups we had to remove all the words we found redundant, in some cases changing the words entirely.

We then moved on to lineation/realisation. Debris handed round another poem, “Michiko Dead” by Jack Gilbert. This time, the exercise was to look at and discuss the line-breaks in the poem; the visual effect on the page itself, how it affected the reading of it. Immediately following this, she handed round the same poem, this time re-edited into a different structure, with a different set of line-breaks. We discussed what effect changing the structure had: did you read it differently? What were the line-breaks telling us? Were they informing the rhythm of it? Were they little epiphanies that the narrator was experiencing as he moved through the poem? Did they make the meaning of the poem covert or explicit?

It took me a moment to realise what was going on, but when I did, it hit me like a slap in the face. The Trinidad poetry scene is very much a spoken word scene. In fact, at the beginning of the process, one of the participants declared: “I don’t write poetry, I record it.” But here they were, sat round in a circle, discussing form, structure and traditional poetic techniques. If you had said to me at the start of the session we’d have a group of slam poets from Trinidad discussing Simon Armitage poems, I’d have called you a nutter. But there we were. It is the single most effective method for teaching “page” poetry to “stage” poets that I’ve ever seen. I was absolutely dumbstruck.

After the session finished, we were set the task of further refining our poems for the next session and then we all had dinner together. It was great, and for some reason, they all really enjoyed my crap jokes, which did wonders for my frankly fragile ego.

After everyone had left, Debo, Pip and I watched one of the neighbourhood cats grapple with something in the garden. We were about to go investigate, when Marcia informed us that it might be a snake. Marcia helpfully added that Trinidad was home to no less than four different species of venomous snake. It was at this point that a clearly distressed Debo uttered one of the best statements of the trip so far: “Wait, you’re telling me there’s poisonous snakes around here?”

Shortly before retiring, Pip and I went for a little walk. As we made our way around the bloc, we noticed that the cute little stray dogs that seem to be everywhere in Trinidad were forming into packs and following us, growling at first, then barking as they gained confidence. We both started to freak out a little, worried that our stroll was about to turn into a sinister Stephen King story. I could almost see the headlines: “Talking Doorstep project ends in tragedy after savage dog mauling.’” Luckily, it turned out to be a case of bark being worse than bite, and we made it back to Mariposa safely.

Incidentally, my new collection, “Fido was a Psycho’ will be available from Wrecking Ball Press later this year.