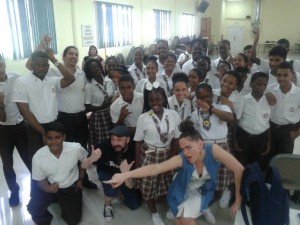 Wrecking Ball Press have teamed up with The Roundhouse and the BBC in a global project that will see Hull performance poet Joe Hakim travel to Trinidad & Tobago. Talking Doorsteps is for spoken word artists aged 16-25yrs and offers an accessible and interactive physical and digital community to share and platform work centered on the theme of HOME. Starting from next week, Joe will be observing and participating in workshops with young Caribbean poets before returning home and working with young Hull poets, then bringing the two artistic communities together for a performance in September as part of the “Contains Strong Language” Poetry Festival, which will be programmed by the BBC and Wrecking Ball Press. Joe will be writing daily blog entries so we can follow his progress. Here’s the third instalment:

And so we arrive at the business part of the journey, the reason we came to Trinidad in the first place: poetry.

But we before we get into that, I just have to say something: Debris Stevenson is without a doubt the best dancer that I have ever met. She absolutely tears it up, owns the dance floor. I quickly adapted my one technique, a version of the Mancunian Simian Shuffle, by adding in some subtle hip movement, but I’m convinced the only reason I got away with it is down to Debris taking the spotlight.

Anyway, after another hearty breakfast, Jean Claude, our man in Trinidad, arrived at the Cafe Mariposa with the participants. Now, in addition to being a dynamite wheelsman, Jean Claude also happens to the leader and driving force (ahem) behind 2 Cents, a spoken word collective of young people aged between 16-25. They arrived a little earlier than expected, but Debris just happened to have a plan for such eventualities. And so, right from the off I learn an important lesson, and that is to have a ‘rolling’ workshop, one that accounts for the possibility of things veering slightly off-track due to people being late, or in this case, early. Debris had brought a word-based card game, just a little something to keep everyone occupied while we finished setting up. It may seem simple, but had I been in the same situation, I would have probably got myself into a right flap, which would have gotten the session off to a tense start.

Once we were good to go, Debris started the session by writing quotes on large sheets of paper, and then placing them around the space. She also had some music playing in the background, once again something that seems obvious in retrospect, but had never occurred to me before. The participants (myself included) then moved around the space, and were encouraged to add lines to the sheets of paper, using the quote as a jumping off point to get the ideas flowing. And then with each subsequent line that was added, we moved along to the next sheet and added one, and so forth and so forth until the sheets were full of words. There was no pressure to maintain a line of thought, or structure or anything like that. It wasn’t even necessary to adhere to the themes that had been established by the previous line.

After this phase of the exercise was over, we all took part in some simple breathing exercises and physical warm ups, like stretches and vocalisations. I have to be totally honest here; up until now, I have never utilised any physical training as part of the workshop work that I have facilitated so far, partly due to the fact that I’ve felt self-consciousness, and partly due to the mistaken belief that things like that are a bit ‘theatre’. But there’s definitely something in it, not only because it wakes everyone up, but also because it gets people to loosen up and ditch some of their own feelings of self consciousness. One of the big difficulties in encouraging people to write and recite poetry in front of each other, especially young people (and especially young people in Hull) is getting them beyond the fear of ridicule. Getting everyone to participate in something together first places them on the same level.

Following on from that, we split off into groups, and each group was given one the sheets that we had filled in on the table, an asked to create a short impromptu group piece. As before, this was more an exercise to get everyone working on the same page, but it quickly became apparent that this was a seriously talented group of young people. Despite only having a few minutes to get something together, each of the groups managed to include elements of choreography and movement as part of their delivery.

After this session, Debris asked them all to gather round and think about the kind of things that may hold them back or affect them when working in a situation such as this. In the main, it was an opportunity for everyone to open to up each other, and establish trust. Most of the things that they relayed back to the group were small anxieties or idiosyncrasies, such as the need to feel comfortable before fully contributing, or the need to be left alone when writing, things like that. It was another way to establish trust in the group by giving everyone the chance to express themselves, but I was starting to pick up on something else; Debris was managing to get everyone’s attention and keep them focused without ever having to raise her voice. As she said to me later on, it’s all about finding ways to implicitly create the rules of a space, without resort to traditional teaching methods, methods that place barriers.

After another quick writing session, we headed out into the wonderful space at the back of Mariposa, the little amphitheatre. It was an opportunity for us each of us to share a poem, and we took it in turns to stand on the stage under the Caribbean sun and recite our work. It has to be said that the work of 2 Cents was absolutely phenomenal. Everything, from their delivery to the actual words, was slick. They’re the real deal, and they’ve got a passion, sincerity and intensity that could really teach the youth of the UK a thing or two.

After the sharing, we had another amazing meal. As I explained to Marcia, our host, one of my real concerns is how I’m going to manage when I get back home. All of the food is outstanding; fresh juices, vegetables and ingredients gathered from the garden of the property, as organic as you can get.

After lunch, we head over to the park. As part of the Talking Doorsteps project, Pip, our lovely and talented film-maker, will be making short films of each of the participants performing a specially written piece around the theme of home, so we spent the afternoon engaging in writing exercises that managed to be quite intense, yet accessible. Already, Debris was managing to push the participants out of their comfort zones, but with a subtlety that only comes through experience. By the end of the session, we had clear agenda for the following day’s session, which would focus on editing techniques.

After we finished for the day, Jean Claude invited us to the 2 Cents Lime. Now for anyone who is unfamiliar with the concept of a Lime, it’s basically this: Take the best house party that you’ve ever been to and times it by ten, and then you’re getting close. Seriously, if anyone in Hull tried to throw a party like a Lime, the police would shut it down. However, here, instead of complaining, the neighbours all come out and get involved. The vibe was unbelievable. I’ve never felt more welcome at a party. We had an intense game of Taboo – party games are a serious business in Trinidad – we danced, we ate. Parents turned up, relatives turned up, friends turned up.

They also had a small catering cart there, serving Doubles. Doubles are pretty much the Trinidad equivalent of a kebab, a little flatbread with beans and sauces. Spicy, messy and absolutely delicious. I had to have two. To be fair, they are called Doubles.

After the Dad of one of the participants gave me a dancing lesson, I came to realise something; that a big part of the reason why 2 Cents are so good at their work is because they are not just a poetry group, they’re a community, a family. They hang together, work together, and play together. And this goes way beyond spoken word. Being part of the collective provides an outlet for them, something for them to feel part of, to feel proud of – an example of a way for them to live and function within society, keeping safe and out of trouble by keeping them busy. It’s incredible.

And for a project that deals with the theme of home, it provides a template for something that we desperately need in the UK right now, especially for the young people in a place like Hull.