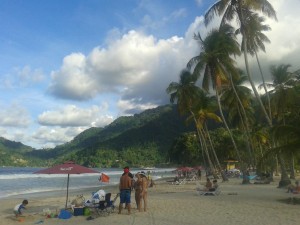 Wrecking Ball Press have teamed up with The Roundhouse and the BBC in a global project that will see Hull performance poet Joe Hakim travel to Trinidad & Tobago. Talking Doorsteps is for spoken word artists aged 16-25yrs and offers an accessible and interactive physical and digital community to share and platform work centered on the theme of HOME. Starting from next week, Joe will be observing and participating in workshops with young Caribbean poets before returning home and working with young Hull poets, then bringing the two artistic communities together for a performance in September as part of the “Contains Strong Language” Poetry Festival, which will be programmed by the BBC and Wrecking Ball Press. Joe will be writing daily blog entries so we can follow his progress. Here’s the second instalment:

I’m caught in the phase in between being asleep and being awake and I briefly forget where I am. And then I become aware of the heat, and I remember that I’m on the other side of the world, in the Caribbean.

The room I’m staying in has a small veranda at the back with a table and chair, so after dunking my head in cold water, I go and sit and look out the window (well, not a window as such, more of a mesh). It’s dense with foliage outside, and I suddenly become aware of a persistent buzz, a strange rhythmic pulse. To my absolute delight, I realise that the sound is emanating from hummingbirds. Lots of hummingbirds. A fleet of them.

I get dressed and head downstairs. The place where I’m staying for the week is called the Cafe Mariposa (Mariposa is Spanish for butterfly). It’s a beautiful open plan building, family owned, and the main eating area is a porch that faces the garden of the property. There are sugar-water dispensers dotted about, and the place is alive with hummingbirds, little neon flecked helicopters hovering around everywhere, hung suspended on the breeze in a way that seems to defy reason, before undertaking dive-bombing raids on the nectar fortresses.

Bleary-eyed, I stumble out into the vast garden. Just to my left is a small church, and located at the back of the property is a small man-made amphitheatre, which will serve as our performance space for the first day of the workshops. Lopinot is located at the foothills of the Northern Range, and everywhere I look there are huge trees and shrubs that look as though they have been transported from the Jurassic age. Because I arrived at night, I couldn’t see just how big and green and magnificent it all was. It’s breath taking, and for a moment I experience total sensory overload. A whole range of emotions floods my body, and I become giddy with it. At that particular moment I’m glad there’s no one around, because I end up blubbing for a bit, unable to fully comprehend what I’m experiencing. Fortunately, it passes quickly, and I pull myself together and head for breakfast.

I’m joined by Debris, poet and workshop facilitator for the Talking Doorsteps project, whom I’ve come to observe and shadow, Pip, film-maker and documentarian for the trip, and finally Debo, a representative from the British Council. We are joined by a couple of other guests who are staying here, Sam and Jacob, two American students who are about to undertake a period of study at the University of the West Indies. We dine on grapefruit washed down with hot chocolate sweetened with condensed milk. The hot chocolate is actually hand made by the siblings who run the establishment, who peel and refine the cocoa by hand. Needless to say, it’s amazing. I’m about to get up and leave the table when I’m informed that this is actually just the first course. Usually, I skip breakfast, so the idea of having a breakfast that consists of courses is completely alien to me. I eat it anyway, because it tastes amazing; yam porridge sweetened with jam and tortillas with a warm salsa, garnished with a peppercorn sauce that is quickly becoming an obsession.

After breakfast, Bianca, one of the owners takes us for a walk around the district. The sun beams down relentlessly, so I slather myself in sun cream and head out. As we head down the hill, the true glory of the stunning vista, previously obscured by the night, opens up. It’s paradise in every sense of the word; big rolling hills dense with thick, lush vegetation. Music is blasting out everywhere, from the houses, from the cars. As we cross a little stream to reach the lower part of the village, a group of revellers are unloading a huge sound-system from the back of car ready for an impromptu early morning rave.

Bianca explains that the people who live in them build all all of the houses -little one-story bungalows with big porches -. As we pass by, everyone greets us.

After stopping by one of Bianca’s cousins to say hello and eat fresh coconuts, we head back towards the cafe, stopping at the last remnants of the La Reconnaissance estate. Lopinot the village is named after Count Lopinot, a French general who originally settled in Haiti in order to become a sugar planter, a lucrative market. After the slave uprisings that began in 1791, Lopinot petitioned the British government for compensation and arrived in Trinidad in 1800, trekking through the mountains until he found this flat plateau, deciding it was ideal for planting and cultivating cocoa. For the slaves, it was a brutal existence. Pointing at a young tree, Bianca informs us that the cashew trees are where they would hang the slaves.

After our walk is over, Arianna, one of the participants of the workshop, picks us up. We have one free day to cram everything in.

“The beach,” we reply in unison.

As we head down into Port of Spain, the daylight reveals just how precarious and scary the road that connects Lopinot to the Port of Spain is. And it quickly becomes apparent that Jean Claude is not unique in his approach to driving, but merely representative of the way that everyone in Trinidad drives – foot-down all the way.

Passing through the Port of Spain, I eagerly crane my neck to try and take everything in. The beauty of the climate and the scenery is often contrasted with glimpses of poverty and destitution. Just before you reach the main centre of Port of Spain, you pass a huge, stinking open landfill and a slum district before hitting the central district, with its large buildings, shops, cafes and bars. We arranged to meet some of the students at the National Academy of Performing Arts; a big sliver building that bears more than a passing resemblance to the Sydney Opera House. After meeting up, we headed to Maracas Bay, which necessitated another clench-inducing drive, this time up a hill, granting us an incredible view of the whole area. Once we’d reached the top, we then had to drive down again, eventually arriving at a beach, the likes of which I’d only ever seen in films before.

It was at this point that I had to make a frank admission to myself. I’d planned on playing it cool, taking it all in my stride, letting it all wash over me. I didn’t want to be the atypical slack-jawed ‘Brits on tour’ tourist. But I was kidding myself. Everything I see and experience blows me away, and I find that I’m running out of adjectives and superlatives. You all better get used to hearing me say, ‘amazing’ and ‘brilliant’ a lot.

The beach is nestled in a bay surrounded by big, rainforest covered hills. The surf crashed and roared, and I pushed my toes into the sand. A guy with a guitar approached our group.

“Can I play you all a song?” he asks, flashing us a big gap-toothed grin.

I smile as he takes the plastic spoon that he uses as a plectrum and begins to strum. I’m expecting to be regaled with some lilting Caribbean melody, or a Bob Marley tune or something, but then he opens his mouth and begins singing:

“Today is gonna be the day that I’m gonna throw it back to you,

By now you shoulda somehow worked out what yer gonna do,

I don’t believe that anybody feels the way I do,