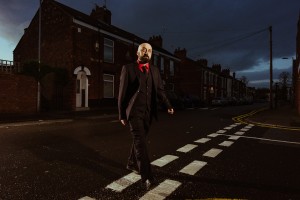 Wrecking Ball Press have teamed up with The Roundhouse and the BBC in a global project that will see Hull performance poet Joe Hakim travel to Trinidad & Tobago. Talking Doorsteps is for spoken word artists aged 16-25yrs and offers an accessible and interactive physical and digital community to share and platform work centered on the theme of HOME. Starting from next week, Joe will be observing and participating in workshops with young Caribbean poets before returning home and working with young Hull poets, then bringing the two artistic communities together for a performance in September as part of the “Contains Strong Language” Poetry Festival, which will be programmed by the BBC and Wrecking Ball Press. Joe will be writing daily blog entries so we can follow his progress. Here’s the first:

I didn’t sleep much the night before. For some reason, I kept replaying that scene from Airplane over and over in my head, that bit when an obviously distressed Ted Striker sits next to the little old lady on the plane, who turns and asks:

“No, I’ve been nervous lots of times.”

Fortunately, my girlfriend, who has flown many times, took charge of the packing. It was a good job too, as I took it upon myself to have a couple of glasses of wine and start ringing round people to tell them things like: “If anything happens to me, I just want you to know that I’ve always been very fond of you.”

General Zod, my cat, usually wakes me up by planting himself on my chest and sticking his paw in my mouth, but on this particular morning he seemed to be a bit subdued, so I immediately took it as a bad omen, a sign that he was aware that something was about to happen, utilising that creepy extra-sensory pet sense that people often attribute to animals.

I like to think that I’m a rationalist, someone not swayed by vague non-existent spiritual forces, but like most people from Hull, I have a large superstitious streak that emerges during times of stress, and the fact that I was flying on Friday the 13th was all a bit much for me.

Eventually my girlfriend managed to tear me away from touching all the wooden surfaces in the house and shepherded me out the door and dropped me at the train station.

The extreme cold weather that the news had been warning us about for days was starting to hit, and as the train passed through Leeds the snow had started to fall, becoming a thick white blanket that covered the ground by the time I arrived at Manchester Airport.

My anxiety about flying for the first time was compounded by the fact that I was travelling alone, because I had no one to guide me through the whole thing. The first big test was passing through customs. As anyone who knows me reasonably well will attest, I have a very shady looking face, so it was almost inevitable that I was searched on my way through. After being manhandled by a bear-like bloke, I was let loose into the departure lounge. My original intention was to settle down to some work, but I was just too jittery, so I occupied myself by pacing up and down the lounge trundling my case behind me.

Eventually the big moment arrived, and I, along with my fellow passengers, was huddled into a big metal tube on the runway. Despite my nerves, I was chuffed to see that I had a window seat, so I sat down and prepared myself for the big moment, and it didn’t take long for my anxiety shift into pure exhilaration. For the first time, I was leaving the borders of my country.

Mercifully, the flight was smooth and uneventful, aside from a bit off turbulence that kicked in just as we were landing in Barbados, the place where I was due to catch my connecting flight. As I stepped off the plane and onto the tarmac, the warm air filling my lungs felt incredible. After a very brief stop it was time to board another plane for the next leg of the journey. I felt confident now, bordering on cocky, as I strolled out onto the runway. This new found swagger was short-lived however, because we got closer to the plane, I realised it was a small two-propeller craft. Once again I had been given a window seat, but I wasn’t as thrilled as I was last time, mainly due to the fact that the view from the window was that of the one of the engines. It was a bumpy, juddering flight, and my hands gripped the armrests every time we hit a pocket of turbulence. Not only that, the plane stopped off in Grenada, meaning I had to go through the whole take-off/landing again.

I was a bit burnt out by the time I landed in Trinidad, but buzzing. I met up with Debris and Pip at the airport, and after a gruelling trek through customs, I had finally arrived at my destination, Trinidad. Debo and Jean Claude, our man in Trinidad, picked us up at the airport.

It was dark out by this time, and our place was up in Lopinot, a village located a few miles outside of Port of Spain. This journey entailed driving up a long, thin, unlit winding road, bordered with thick bushes and trees, and the odd sheer drop. Jean Claude tackled the drive with much aplomb; foot down almost all the way, navigating the all the twists and turns with the speed and determination of a rally driver, even swerving to avoid the stray dogs did little to put him off. Indeed, he was so at ease that even managed to turn around and converse with us directly.

After being given a warm welcome by our host Hyacynth, we each retired to our rooms, knackered by our journeys. After taking off my shoes, I headed out onto my veranda to type this, the first of my blog entries.

Tired and sweaty, surrounded by the unfamiliar noise of thousands of exotic creatures, it suddenly dawned on me: I had made it, I was here, in Trinidad, and the real journey was just beginning.