Thursday June 9th saw Kardomah94 play host to one of the finest evenings of spoken word I have ever witnessed in this fair city. ‘Word On The Street” is part of the forthcoming Freedom Festival, and this was the first in a short series of tasters leading up to the main event in September, organized in alliance with A Firm Of Poets and Wordlife and, for this opening salvo, A Car Full Of Poets and Wrecking Ball Press. Our hosts for the evening were Matt Abbot and Vicky Foster.

The evening kicked off with music from Gudrun’s Sisters, an acoustic duo of fiddle and ukulele who sing songs of heartbreak and harlotry. They are gleefully grubby and quite magnificent. They only did four songs, one about Satan, a saucy number about an organ grinder, a murder ballad and a cheerful little ditty about heroin addiction and syphilis. I fell instantly in love.

Next up was Dean Wilson, the self-styled fourth best poet in Hull. How best to describe Dean for the uninitiated? The first time I saw Dean Wilson perform I was reminded of the night I saw Johnny Vegas in his very early stand-up shows. There was that same crackle of danger in the air, that sense of slightly unhinged hysteria. Was this fella for real? It was like a psychiatric ward outpatient had given his social worker the slip whilst on day release and leapt onto the nearest stage for an agonized bout of public therapy. Dean’s poems of love, loss and illicit liaisons with Emmerdale extras had the audience howling with laughter and gasping with disbelief, often within the space of one line. The brilliant thing about Dean Wilson is that he manages to be both heartbreakingly wistful and pant-pissing funny at the same time. His debut collection “Sometimes I’m So Happy I’m Not Safe On The Streets” is out in October. Do yourself a favour and invest in two copies – one for yourself and one for someone you love. 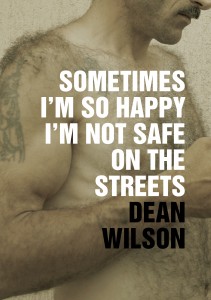 The Freedom Fighter Poets are local wordsmiths who have been honing their work in a daytime workshop prior to the gig, and they delivered some beautiful stuff. Alyx Tamminen, Rob Eunson, Jody Russian-Red and Ian Winter were by turns poignant, powerful, audacious and commanding. Julia Corbett gave a wonderful eulogy to Muhammad Ali with “Floated Like A Butterfly, Stung Like A Bee” and a pause for reverie with her moving ode to Hull, “Daydream At Lord Line Building”. If their performances tonight are any indication, the future of spoken word in Hull is looking very bright indeed.

As well providing seamless links between the poets, Vicky Foster treated us to her brilliant “Why I Love Where I Live”, a multi-generational journey through the psycho-geographical ley lines of our fair city, celebrating the unique blend of guts, compassion and resilience that makes our people what we are. Superb stuff.

Helen Mort was superb as ever. She read from her new collection “No Map Could Show Them”, the follow up to the much-lauded “Division Street”. Helen has an unerring eye for the tiny crucial detail and her images stick solid in the mind like crampons on a craggy rock face. Her poem about Lillian Bilocca was incredibly powerful and deeply affecting. It was also very beautiful. Helen said afterwards that Hull is one of her favourite places to read poetry, and for that we can only be grateful, because the sooner she comes back the better.

And so to the headliner – Luke Wright. I’d never seen Luke perform before, not heard a single word of his work, but everyone assured me he was brilliant, which, in the event, turned out to be something of an understatement. Quite simply, he blew me away. He opened with a hilarious six-minute epic about a Georgian oyster guzzler that contained more killer lines than most poets manage in a lifetime. I was left breathless and reeling, but that was a mere warm up. For the rest of his performance Mr. Wright played football with our brains, juggling them effortlessly from toe to neatly chiseled Chelsea Boot toe, before flicking them over his shoulder and casually back-heeling the entire audience into an open goal before striding off stage to roars of delight. An absolute triumph.

Here’s to the next Word On The Street in Hull. Whatever you do, don’t miss it.