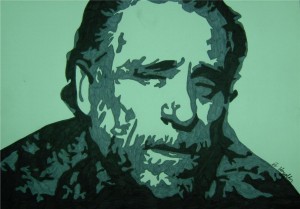 I’ve always been deeply unsettled by the idea of work. It seemed like a horrifying imposition to me, the notion of giving up your precious time on this bright and beautiful planet purely to make money for someone else; someone who would, more often than not, gladly work you to the edge of the grave and then skip merrily over your lifeless body in search of the next servile victim. This seemed like complete and utter madness to me. It railed against my most basic concept of human freedom.

All through my childhood, the adult world of work loomed over me like the shadow of a malevolent stepfather. The message was etched clearly in the tired and grimy faces of the adults around me: work wore you out. It sucked the life marrow from you on a daily basis. Work wasn’t about doing the things you wanted to do. It was about doing tedious shit that someone else demanded.

Then I left school and all my worst fears were confirmed. The offices and shops and factories were staffed by dull witted sadists who made you get out of bed when it was still dark and then barked orders they barely understood themselves for eight hours solid until it was time to go home.

Like everyone else on the chain gang, I stepped into line, kept my mouth and mind shut and my sense of injustice quelled. This, it seemed, was how the world revolved. But I still couldn’t help thinking that the act of going to work was like queuing up for a daily punishment dished out by churlish medieval glove puppets. I acknowledge I’m not alone in this idea. Most people probably feel the same. But I couldn’t help thinking that there was an escape route somewhere. I would stagger home in the summertime, past packed pub beer gardens and wonder how the hell they managed to balance the time/money equation to their benefit.

This attitude was probably forged by a recognition flash ignited from an early childhood book: Mark Twain’s Tom Sawyer. I stood directly behind Tom when his spirit crumbled at the yawning length of Aunt Polly’s fence. And I punched the air with glee when he managed to shackle his free spirited peers into slapping on the whitewash. Work is anything a body is obliged to do, he said. Dead right, Tom. Only problem was, unlike Tom, I couldn’t talk anyone else into doing my graft for me.

Tom Sawyer and Huckleberry Finn were probably the first two books I read all the way through. They lit something up in me. I didn’t want to be part of straight and so-called respectable society, a set up that killed your time and crushed your spirit; I wanted to run away from the city and live the life of a carefree hobo. Which is all well and good if you live in the Deep South Of America at the turn of the century. You can pull catfish from the Mississippi and smoke a corncob pipe as your raft punts gently downstream. If you tried to live a similar dream in the North of England in the Eighties you were more likely to end up picking half-eaten kebabs out of waste paper bins.

I would scour Factotum when I got back exhausted from work, crashed out on the couch, afternoon TV on, volume down, the room heavy and blue with smoke. Its lines were so clean and simple and true. I rampaged through it, and then hoovered up every other bit of Bukoswki I could find.

And then, when was in my late teens, I discovered Charles Bukowski. It came as something of a revelation to me, to find books like that: brutal and beautiful, simple and seemingly profound. Books about everything and nothing. Some bloke who was surplus to requirements who just stumbled around in a daze. There it was, the flashbulb in my head again, that light of recognition. I would examine Bukowski nightly. They became the most heavily thumbed books at my bedside.

I’d first heard about Charles Bukowski via “Barfly”, the film with Mickey Rourke and Faye Dunaway. I thought the central Chinaski character was hilarious; W.C Fields with a dirty mouth and an oddly saintly mind, a tramp with poise, a piss-stained angel with attitude.

I went looking for his books and found “Factotum” first. I was living in a crumbling manor in a sketchy area and Factotum chimed true with me. It was another one of those rare and precious times when a book reads you. I would scour Factotum when I got back exhausted from work, crashed out on the couch, afternoon TV on, volume down, the room heavy and blue with smoke. Its lines were so clean and simple and true. I rampaged through it, and then hoovered up every other bit of Bukoswki I could find.

At this point, I was working in the wholesale food industry, i.e., I used to ride shotgun on a wagon visiting local grocers and chip shops and supermarkets, stacking their back yards and cold stores with cut-price King Edwards. It was one of the best jobs I ever had, especially in the summertime. It was like riding around the lawless trading posts of the Old Wild West. I encountered psychopaths and sweethearts in equal measure; there were enough characters in the fruit shops and fish shops to fill ten novels twice over. My partner and I struck cutthroat deals and pulled off outrageous stunts. We traded in bulk carbohydrates and other essential goods, and dealt in cash only. It was like being a pirate on a sea of grimy traffic.

I’ve had loads of different jobs and I’ve tried to make the best of all of them. Puppet seller seemed quite a promising career. My pal Sean had an Uncle who had a job lot of “Huggy Buggs”, a Sesame Street style character who clung around your neck with the aid of Velcro paws. One mohair-encased arm formed the neck of the puppet and the hand would mouth the words, a pair of rolling cartoon eyes perched on your knuckles. When you were laden down with half a dozen Huggy Buggs you were like the Pied Piper of Withernsea Market. I sold dozens of the little buggers. The only problem came when you were down to the last one. Then people just assumed you were a wandering eccentric.

Bukowski’s book seemed to understand the obvious insanity of situations such as this; the way what’s left of your brain gets pulped into strawberry jam by the endless grinding dismay of it all. Your body drained by day and your mind sucked dry at night. I still don’t think anybody has captured the relentless pointless horror of work as perfectly as Bukowski did in Factotum – although Fred Voss came close with “Goodstone”. Books like this can make you feel less alone if you ever feel like the world of work has got you by the throat.

Now I am lucky enough to make my money by writing, which has never felt like work to me. But even so, old habits still die-hard. That last sentence took me four hours to write, in-between wandering off to make cups of tea and stare blankly out of the window. Maybe I should have been a Lollipop Man. They don’t have to start work until they’re sixty-five.

Now that’s what I call a proper job.