A great review of Peter Knaggs’ “You’re so vain (you probably think this book is about you)” by Dick Ockleton in Dream Catcher Magazine. 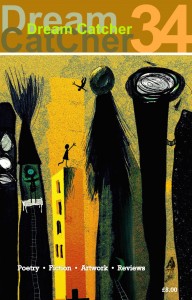 It’s not every day you come across a poem with the title “Scunthorpe Police Swoop on Lunatic Bean Fetish Man”, but by the time you reach page 72 of Peter Knaggs’ “You’re so vain” collection, it doesn’t seem anything out of the ordinary. “Normal for Knaggs”, you might say.

You know you are in for something different from the off. The arresting cover – a face formed from a pair of scissors, a comb and a button, should seem harmless enough, but there is something unnervingly fierce about it and the significance of those bloody (literally) scissors comes back to haunt you.
Page by page, Knaggs has the ability to surprise, intrigue, amuse, sadden and shock in equal measure and it makes for an oddly addictive collection. You really do want to know what happens next. The accessible style of these pithy, cleverly crafted pieces keeps you turning the pages.
Knaggs’ gritty, witty poems take you on a journey through a world populated by meticulously observed and totally believable ordinary people, just trying to get by on a day to day basis. You are introduced to their shortcomings, their labours, their hopes, their dreams and their frequent disappointments. They just keep at it, ever more inventive in their efforts to keep their heads above water by whatever means, be it working in unrewarding jobs, lawbreaking, fighting, practical-joking, conning. And, now and again, the odd murder is dropped into the mix – quite literally in the case of an adulterous trapeze artist. Those scissors also make a couple of appearances, broken and sinister.
They are a motley bunch, Bobby, Billy, Ox, Banana Dave, Arnie, Stiggy and the rest. You join their lunch breaks and eavesdrop on their conversations. The author’s acutely-observed scenarios and quirky fine detail (“White bread impressed with grey fingertips like dabs down the nick”) put you right there with the characters. You could perhaps warm to some of these lads, but you definitely wouldn’t want to meet Gasher on a dark night.
But the hapless, ever-optimistic Crusoe is the star of the show. He appears as a steady thread running through the book. There is more to Crusoe than meets the eye. Stuck in an unhappy marriage, too scared of his wife’s brothers to get out, he “sometimes wants God to give him his receipt so he can take his whole life back and get a refund”. Even his own mouse traps attack him. Crusoe has firm opinions on what does not constitute modern art, and is meticulous about cleaning his van. He is on a relentless (so far unsuccessful) quest for self-improvement, but has also been known to “moon” in Macdonald’s. His frequent appearances and obviously sympathetic treatment might lead you to the conclusion that he is the narrator’s best mate.
Recurring themes of poverty, law-breaking and tediously stupid, incompetent bosses, are lightened by moments of joy and release. There is a character who goes up on the roof in all weathers to escape – “it’s the quietness, the otherness, the being above”. There are “boisterous shirts” which apparently make the wearers irresistible to the opposite sex – or is that just the beer talking? Even the relentless bashing of inept managers is punctuated by a couple of moments of (almost) sympathy for their situation. The ongoing fight between the “Devil” and “God”, or the pitying parallel drawn between a boss and an old library book that nobody wants to borrow.
But now and again you are brought down to earth with a bump. The gnawing poignancy of a woman who dies, alone, with “two losing lottery tickets in her purse”, or the helplessness and horror of a football stadium tragedy.
And then there are moments of pure whimsy – a relationship with a mermaid, or a “Clockwork Orange” style over-luxurious use of language to describe the gluttonous “Badger the Cadger”. You can almost hear the slobbering.
This collection is a pick and mix of real lives. It takes you through the highs and lows and it makes you stop and think. Never boring, it crackles with originality. The wry wit keeps going right through to the end, with the final poem’s take on being hard up – directions given to an imaginary bargain hunter on how to navigate by a succession of “Pound shops” to reach the ultimate goal – a shop that sells everything for 10p – Paradise!
All in all, a refreshing read.