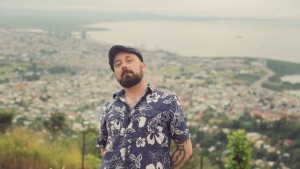 Wrecking Ball Press have teamed up with The Roundhouse and the BBC in a global project that will see Hull performance poet Joe Hakim travel to Trinidad & Tobago. Talking Doorsteps is for spoken word artists aged 16-25yrs and offers an accessible and interactive physical and digital community to share and platform work centered on the theme of HOME. Starting from next week, Joe will be observing and participating in workshops with young Caribbean poets before returning home and working with young Hull poets, then bringing the two artistic communities together for a performance in September as part of the “Contains Strong Language” Poetry Festival, which will be programmed by the BBC and Wrecking Ball Press. Joe will be writing daily blog entries so we can follow his progress. Here’s the last instalment.

It was the final night of the project. There would have to be a day of evaluation and that kind of stuff, but essentially this was the end of the line. The Café Mariposa was buzzing, and it wasn’t just the hummingbirds. When the place opened around five years ago, it was just a café. Eventually they added the guest rooms, and their latest project was the construction of the amphitheatre as a performance space. The idea being to just build a small family enterprise, a little business that could show visitors another side of Trinidad, a rural retreat away from the hub of Port of Spain. And it was working. There was a good vibe about the place, and the surroundings and good food were the icing on the cake. There was the issue of remoteness, but the bumpy ride to and from Lopinot became part of ritual. It was a small price to pay for that feeling of being truly away from it all. At the foot of the hills, surrounded by the dense rainforest, it was easy to put ‘real life’ to one side and just get on with creating stuff.

I wrote a small poem as part of the project, and even though it was a slight, little thing, there was still the question of whether I’d be able to edit it and get it committed to memory. But out at Mariposa, in-between the workshops and gigs, I found that I managed to do it just by taking the odd ten minutes and wandering about in the grounds of the café.

In addition to it being the culmination of the project, it also marked the launch of the performance space out the back. Everyone was mucking in to make sure it was a success. A lot of the village are related to the Guerrero family, cousins, nephews, nieces, so we had plenty of volunteers to help out. While a cocoa-covered suckling pig cooked over charcoal, people, from old to young, dashed about, arranging seating, putting up lights and trimming back bushes and shrubs. This was their chance to sell their burgeoning bed and breakfast not just as a place to stay, but as a performance space as well.

Marcia remarked that she had seen us on the telly the previous morning, and that she’d received a load of bookings just after it aired, so she was feeling cautiously optimistic. I was pleased for her.

The space at the back was special to be fair. Dug into the ground, with staggered sides providing three tiers of seating, the small stage area faced away from the property and up towards the wild, wild hills. There was a sweet-spot in the middle of the stage, an area that would produce a crystal-clear reverb, meaning you could hear your own voice as though it was coming through in a monitor, meaning you could get your levels just right. You could stage a mad play in it.

As the participants arrived, we convened and warmed up, and set about working on the running order. Debris plotted the order of the performers like a graph. They had been restricted to a short set time, around four minutes, and they were asked to think about how the tone and content of their poems might fit into the bigger picture of the show, highs and lows, when to follow intense with more light-hearted, that kind of thing.

In a way, this was the final part of the ongoing lessons over the course of the week. As I’ve said previously, Trinidad’s spoken word scene has gained momentum over the past few years due in part to the popularity of poetry slams, so this has produced a slam-orientated culture. Now I’m going to go out on a limb here, and state for the record that I’m not really a fan of poetry slams. Although I think they are a great tool in education, an effective way of grabbing attention and getting people up and reading, I have great reservations about the long-term effects of engaging in slams. I think a lot of it is down to the overt competitive nature of it. I’m all for competition in art, and in many ways, art is dependent on using the achievements of others to spur you on – ‘that’s a great bit of writing, I need to up my game’ or ‘that’s a killer tune, I need to get out and gig more’ – but once it becomes all about points and judges, something changes. What happens is that people tend to find they have one or two good slam poems, crowd-pleasers, and they end up performing the same ones over and over again. And when they set out to write something new, they find themselves trying to emulate the style and impact of their previous work in order to conform to the standard that they feel that they have set previously. Experimentation, messing about, trying something new, takes a back-seat and becomes a secondary concern. You get stuck in a slam rut. Sometimes the rut is so big, that other people become trapped in it. Seeing the success that someone has had with a certain sort of winning style and approach, all the up-and-comers start to model their work and performance on the visible face of the winners; before you know it, you’ve got a scene built on clones.

Maybe, deep down, it’s just the binary nature of it; it becomes about winning or losing.

One of the great things about watching 2 Cents prepare is how they manage to cast aside their usual modes of approach for one that is more egalitarian. Tonight is just a show, a chance for them to do their thing. There’s no winners or losers, just a chance to dazzle a crowd with what they do, what they say. The pressure of having to battle to win the favour of a panel of judges has been replaced by a different kind of buzz, the one of getting out there and doing it for the sake of doing it.

As the night falls and the guests arrive, the whole space lights up. Seeing it illuminated by lanterns and beaded-strings of little lights gives the whole place an ethereal quality. I half expect to see some little goblin wandering around.

To Marcia’s great relief, the place quickly packs out. Not only will the space be baptised in proper fashion, but all of the food she’s spent the day toiling over will be eaten.

Poetry Under the Stars commenced, and I kicked off proceedings with my little poem. And then 2 Cents delivers an absolutely storming set. Freed from the need to compete, they instead weave their individual performances into a bigger structure, one that manages to encompass the whole experience of life in Trinidad, the good and the bad, the beauty and the tragedy, the warmth of the sun and life in the dark. From the impassioned sermons of Emmanuel and Michael, to the comedy skits of Jonathan and Kyle; from the feminist dialogues of Denika and Ashlee to the meditations on peace and relationships from Alex and Kaveesha; from the soul-searching of Idrees and Seth to the exuberance of Isaiah and Leeum; from the explorations of the personal of Ariana, Shania and Kirby to the confrontation of political realities from Marcus and Derron.

Debris topped off the evening with an emotionally charged performance that had the audience looking on agog. It was clear that everyone felt something extraordinary had taken place. (Later on in the evening I would be approached by a woman with tears in her eyes: “I’m so glad I came here to see this,” she said. “I worry about the future that the young people in Trinidad are facing, and this gives me hope.”)

Before we went to eat, the Guererro family took to the stage. They explained that their journey had begun years before, when they toured as a family band, performing parang music, a traditional Trinidadian folk music with its roots stemming from the Venezuelan migrants that made places like Lopinot their homes. After winning a national competition, they returned home, to begin building the place in which we were all sitting. Their father encouraged them, hoping they would build a creative place that musicians, artists and poems could feel welcome in.

Parang has a strong nocturnal connection, they explained. Traditionally, and especially at Christmas, people would visit each other’s houses and perform together. And with that being the case, they couldn’t let us leave without sharing something with us. They played a couple of songs, concluding with, fittingly, a version of ‘Consider Yourself’.

As we headed to over to the house to fill our bellies with pork and tortillas, there was no doubt that in some way we were part of a family.

And also Isaiah and Vincent

And also thank you to anyone else I may have forgot to mention.

Thanks for reading the blog.