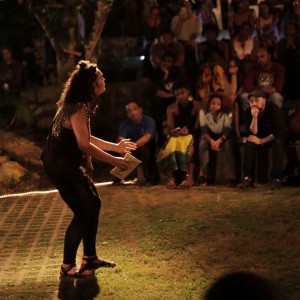 Wrecking Ball Press have teamed up with The Roundhouse and the BBC in a global project that will see Hull performance poet Joe Hakim travel to Trinidad & Tobago. Talking Doorsteps is for spoken word artists aged 16-25yrs and offers an accessible and interactive physical and digital community to share and platform work centered on the theme of HOME. Starting from next week, Joe will be observing and participating in workshops with young Caribbean poets before returning home and working with young Hull poets, then bringing the two artistic communities together for a performance in September as part of the “Contains Strong Language” Poetry Festival, which will be programmed by the BBC and Wrecking Ball Press. Joe will be writing daily blog entries so we can follow his progress. Here’s the seventh instalment.

Some thoughts about poetry…

We’re at the U.We.Speak open mic at the University of West Indies at the St. Augustine campus. The night originally began as a place for debate, a place where students could gather to discuss issues that affected them and the issues at large that face Trinidad and Tobago. What started as a forum for political discourse quickly caught the spoken word bug, causing it to shift towards its current form, which is as one of the longest running consistently popular open mics in the area.

We’ve been invited to perform, so Debris I turn up with some of the workshop participants. The event is open air, hosted on the bank of a grass verge near the canteen and social areas of the campus. A PA and a mic is set up, and mats are placed on the floor for people to sit, or crash out, on. The atmosphere is relaxed and informal, and a crowd quickly gathers to hang out and enjoy some poetry. I’ve learned that in Trinidad, rather than clap loudly, very often appreciation is shown by a click of the fingers. And I learn something else this evening. As the host takes to the mic to introduce the night, he explains that the audience will often throw their shoes when a poem is really good, but, he says, turning to the newcomers, under-arm throws only. He doesn’t want anyone to get clobbered in the head by a stiletto or sandal, after all.

After some excellent poetry, my name is called, the first guest of the night. I’ve travelled very far, the host explains, to be here this evening. All the way from Hull as part of the Talking Doorsteps project, so give me a big round of applause. I take to the mic, and after a brief accent challenge with Idrees, I do my first poem. It’s hot, and my lips are dry. There are halogen lights either side of me, so I have to squint to try and make out the crowd. How are they doing? Do they understand me? Are they enjoying it? I’m not sure.

For reasons I still can’t explain, an idea pops into my head. One of the things we’ve been covering in the workshops is the concept of ‘liveness’, incorporating and reacting to the environment in which we perform, letting it influence the performance, living in the moment. I head over to one of the discarded shoes at the edge of the performance area. I pick it up. Here we go. A bit of banter, Hull-style. Responding. Reacting. I pick up the shoe and hold it up to my face. I inhale deeply. An audible gasp reverberates around the audience. This is solid gold, trust me. “It’s ok,” I say. “Trust me, in Hull, we do this all the time.”

I sniff again. “It’s called shoe divination. I can tell a person’s fortune just by smelling the inside of their shoe.”

Suddenly, I find I’m able to see beyond the lights. For the first time, I can see the faces of the crowd. They look shocked, upset even.

It’s too late now, I’ve committed, so I blunder on. “Er, this person eats a lot of cheese. And they’re really into football. And unfortunately, two years from now, they will lose their leg after a vicious attack by a Cayman croc.”

I smile and look at the audience. “Time for another poem then?”

I don’t take any pride in my somewhat strange behaviour that night, but, with all the subtlety of using a bowling ball to open a tin of beans, it allows me briefly talk about how the culture of spoken word and poetry in Trinidad and Tobago differs from what I’ve experienced in the UK.

And at this point, I think it’s important to state that I am in no-way trying to speak on behalf of UK poetry as a scene, or a thing, because that would presumptuous and impossible. UK poetry is so broad and diverse in its styles from region to region that it would be churlish to attempt to put myself forward as some sort of expert. Likewise, I can’t pretend to have experienced all that Trinidad has to offer in just one week. This is just from my perspective, talking about what I’ve noticed. Totally subjective, like.

One of the aims of the Talking Doorstep project is to film the participants performing a short poem inspired by the theme of ‘home’, utilising some of the elements that they have taken on board as part of the whole workshop process. By necessity of the length of time we had to work with, and then film and record, combined with the number of participants (17!), means that we had to limit the pieces to a running time of just over a minute. From the off, it quickly became clear that the idea of writing and performing a one-minute piece was almost an alien concept to the participants. The general consensus reaction was one of: ‘How in god’s name can you say everything you need to say in one-minute?’

From the first day of the workshop, when we gathered in the performance space at the back of the Mariposa, it was clear that they all wrote and performed work that was long and packed with detail. Once again, I can’t speak for all UK spoken word, but here we tend to write shorter pieces and do more of them. In the space of a ten-minute open mic slot, someone such as myself could cram in three, maybe four, maybe five pieces. In Trinidad however, the poets tend to see that slot as a challenge to write a single piece. One of the primary reasons for this is because they have a lot they want to say.

UK poetry tends to be more concerned with the self, and the exploration of it. Even though we are often trying to say something about the world and our immediate present, this is often done through the filter of subjective experience. By talking about our internal lives and our inner-most thoughts and feelings, we hope to land on something universal, something that reverberates through our audience so they recognise something of themselves within the author’s personal view of reality. But the majority of poetry in Trinidad is politically charged, and seeks to address the visceral reality of what they are experience through polemic, through the use of eloquence as tool for change. This is, at its heart, protest poetry. This poetry wants to pull down established orders by shining a harsh light on what is fundamentally wrong with Trinidadian society. The drugs and violence. The vile treatment of women. The corrupt political system with its ties to gas and oil. The lack of opportunities for the young, and all the temptations that seek to destroy their peers. The quest for truth and the battles of faith. The failures of the previous generations and the lack of role-models.

That’s not to say there’s no room for sentiment or humour in Trinidadian spoken word. There’s still room for poetry about nostalgic tales of childhood romance gone wrong. There’s still room for witty recollections of family gatherings. There’s still room for theatrical explorations of dancing and popular culture. But one of the defining elements of the poetry I experienced in Trinidad, and one of the core ethos at the heart of 2 Cents Movement, is the heartfelt belief that words and poetry can affect real change within their immediate surroundings. That by encouraging the young to write and perform, they are giving them the tools for empowerment. That they are giving them opportunity to rewrite and remake the world around them, to offer them another path, another way of living. They are saying to the young that they too can change their lives, and the lives of those around them, for the better. And the way to do that is through awareness, through knowledge; through art, and through culture.

One of the most beautiful aspects of working with Debris was the way in which she introduced the concept of the poems having as much power on the page, albeit in a different form. Because of the strong spoken nature of Trinidad poetry, much of it exists ephemerally, recorded into mobile phones, hastily written notes tapped onto electronic screens. Poems that, aside from the odd MP3 or WAV, only exist in the moments when they are uttered into a microphone on the stage. By giving them access to another outlook, another approach, they began to explore the possibility of a permanently recording their work by turning those incredibly slick diatribes, full of wordplay and rhythmic digression, into something physical, ink stamped onto paper. Something that will be able to survive longer, and travel further, than those brief moments on stage. Because as vital and important as those performance are, this blinding flash of white-light of expression, this super-nova of creativity, needs to be captured and preserved, for all of the future generations that will follow this initial burst of activity.