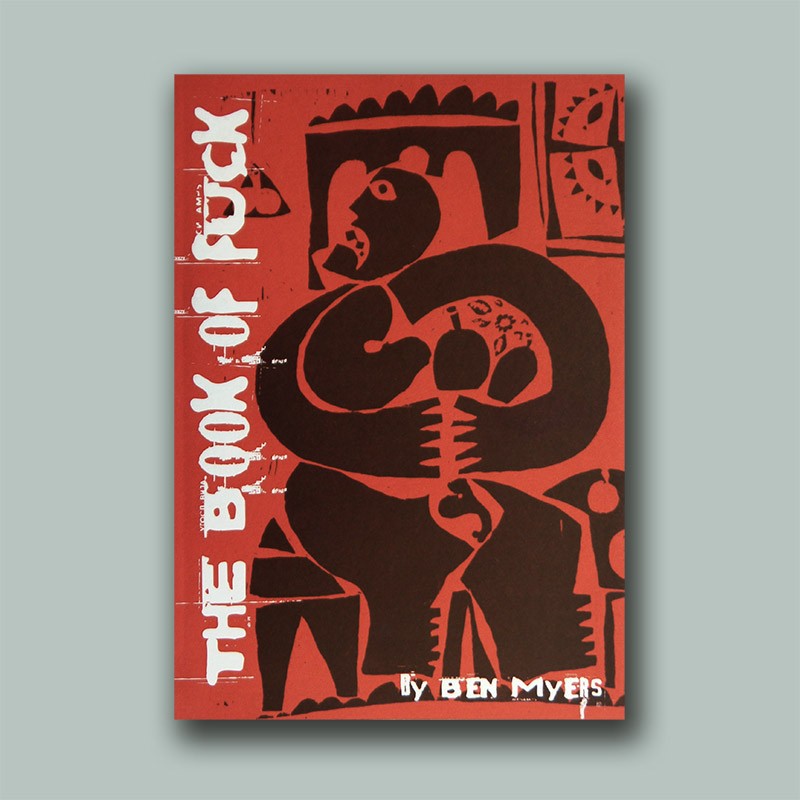 The Book Of Fuck

Written in real time over seven days THE BOOK OF FUCK is a short, sharp pun-addled pulp fiction pastiche where the absurd underworld of music – and reality itself – is exaggerated to new dimensions.

Following the frantic movements of a rock fan on the trail of America’s public enemy number one, THE BOOK OF FUCK is a buckled break-neck rant let loose at punk rock speed. Literature comes none more black.

“With a title like that, you’ve got to write a good book or have the word “wanker” silently appended to your name forever after. Just to make things more difficult, the press release trumpets the fact that The Book Of Fuck was written in seven days. I don’t know about your criteria for choosing a book to read, but something written in seven days sounds to me like it will be a cramp-stomached vomit of speed-crazed gibberish, especially if the back cover states it’s “a buckled break-neck rant let loose at punk rock speed”.

Thankfully, none of these things are true. The Book Of Fuck is a homage and a pisstake of the twilight world of music journalism, a first person reportage of a starving hack sent off in search of a death metal antichrist superstar called, to the joy of America’s Christian masses, the God Of Fuck. GoF is like Marilyn Manson, Alice Cooper, Iggy Pop and GG Allin all rolled into one – the bogeyman of popular culture. But GoF doesn’t get much of a look-in even though the search for him propels the plot – the pages are taken up with the internal monologue of our protagonist, a mix of furious punning, musical musing and starving artist clichés twisted into new shapes, all set against his love of London’s squalid glamour. It’s a prose style that can certainly be called punk rock, but the tone of our hero is far more gentle and even genteel than even the most half-hearted sneer from Mr Rotten. He’s a Cat Stevens’ fan, for Christ’s sake.

And, as the work of a small UK publisher, Wrecking Ball Press, The Book Of Fuck has superb production values: from the size to the spacing to the use of fonts, this is a book that wants to be read. Sadly there are numerous typos scattered through it, but then, that’s very punk rock too so I guess I’ll have to live with it.” – Chris Mitchell, Spike Magazine

Ben Myers has the imagination of a lovable serial killer, his writing will fill you with love and scare you to shit.” – Kelly Jones

Born in 1976 in the north-east of England, Ben Myers is an award winning novelist and journalist.

His first ever published fiction and poetry featured in editions #3 and #4 (1999 and 2000 respectively) of Wrecking Ball's The Reater anthology alongside work by established writers such as Charles Bukowski and Simon Armitage. Wrecking Ball Press published Myers' acclaimed debut novel The Book Of Fuck in 2004. The author claims to have written the work over the course of seven sleepless days and night on the eve of eviction from a property in South London that he was illegally inhabiting. The Book Of Fuck was also published in Italian as Il Dio Della Scopata in 2005. His second novel Richard, about the disappearance of musician Richey Edwards, was published by Picador in 2010 and became a best-seller.

His recent novel Beastings (2014) was the recipient of the Northern Writers’ Award and Pig Iron (2012) was the winner of the inaugural Gordon Burn Prize and runner-up in The Guardian’s Not The Booker Prize.  His short story ‘The Folk Song Singer’ was awarded the Tom-Gallon Prize in 2014 by the Society Of Authors. His most recent poetry project Heathcliff Adrift exhibited at Durham Cathedral in 2014 and at The Bronte Parsonage in 2015.