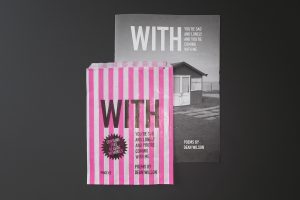 There’s been anticipation for new work from the fourth best poet in Hull – Dean Wilson – since 2017 thrust him in front of bigger audiences. The secret’s out, now, and Dean’s increasing number of fans want more.
Dean has been living in Withernsea, East Yorkshire, for the last few months, and the poems have been coming thick and fast.
“Why With? Why not? When people read the poems from WITH I want them to feel the urge to jump in the air and then jump in a car and go to Withernsea.
“I’ve been going to With on my holidays since the 1970s and I love the place. It’s friendly, and I never get bored there. It helps me. I tasted my first alcohol in the Spread Eagle and used to stay in a caravan on the park. It’s a place of pure joy and happiness and it always brings back happy memories.”
Withernsea has brought Dean’s muse back, in a creative period that has generated in excess of 150 new pieces of work, and has also seen him commence work on his first novel. WITH is a small selection of these poems, published here in a large format magazine by Wrecking Ball Press. 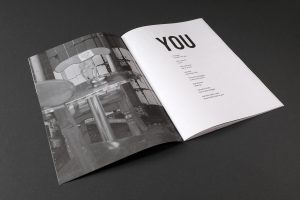 The creative outpouring followed an invitation from fellow poets Mel Hewitt and Vicky Foster to join them for an evening in a Withernsea chalet that Mel was holidaying in.
“It was the opposite of debauched. It was in July. We chatted, went for walks, watched the sunset, and there was a strange and beautiful energy in the air, as there always is in With. Without that trip this poetry wouldn’t exist. I liked it so much there that I decided to get a place there of my own. I’ve got a chalet on the edge of a cliff.
“That place saved my life. I’ve been there recuperating and I’ve been writing like a silly bastard. All of the poems in WITH were written in With: the town runs through them and the place inspired the work.”
WITH isn’t a follow-up to Sometimes I’m So Happy I’m Not Safe On The Streets, because Dean would feel unfaithful bringing out another collection just yet, even though he’s written so much about the town that there’s probably enough for a full-length Withernsea collection in the future. Instead, WITH is a collection of eleven poems, with stunning photographs by Graham Scott of Human Design that capture the town’s spirit and magic.
Dean bumped into Graham and Wrecking Ball editor Shane Rhodes in a pub a few weeks ago.
“I told them I was thinking of putting my With poems together as a pamphlet, because I have a stapler and I know how to use it. But they said no, let’s do it properly, and help increase the house prices in With. 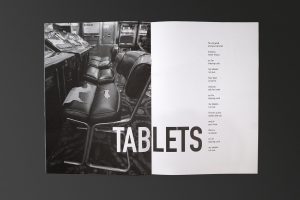 “Human Design designed my last book. Once you’ve had that level of perfection you keep on wanting it. The photographs and the design bring the town to life on the pages.”
A short title for a short collection, but not to be outdone by Dean’s first book WITH is subtitled You’re Sad And Lonely And You’re Coming With Me.
“It was a very personal moment. Someone was very insistent about it and that’s what they said.”
The mystery and intrigue doesn’t end there. WITH comes in a goodie bag packed with surprise seaside-related gifts.
“The contents are a secret. Well. One of them is a sixpence, because I remember playing in the arcades and amusements with sixpences. And there’s a bingo card, too, which has been ‘Dobbed by Dean’.”
Dean has written four pages of his novel so far. He’s given himself two years to finish it. Until then, WITH will provide its readers with quite enough to consider.
WITH will be launched in Hull on Tuesday 11th December at Pave (8pm, free entry), where Dean will be joined by Elvis impersonator Bobby Diamond (“I think he’s wonderful, he’s mesmerising on stage”). There’ll be a raffle, too, where prizes might include a signed copy of Sometimes I’m So Happy I’m Not Safe On The Street or might be more compelling secrets from the mystical Withernsea.
A Withernsea launch of WITH is planned for early 2019.
WITH can be pre-ordered here.
← Previous Next →