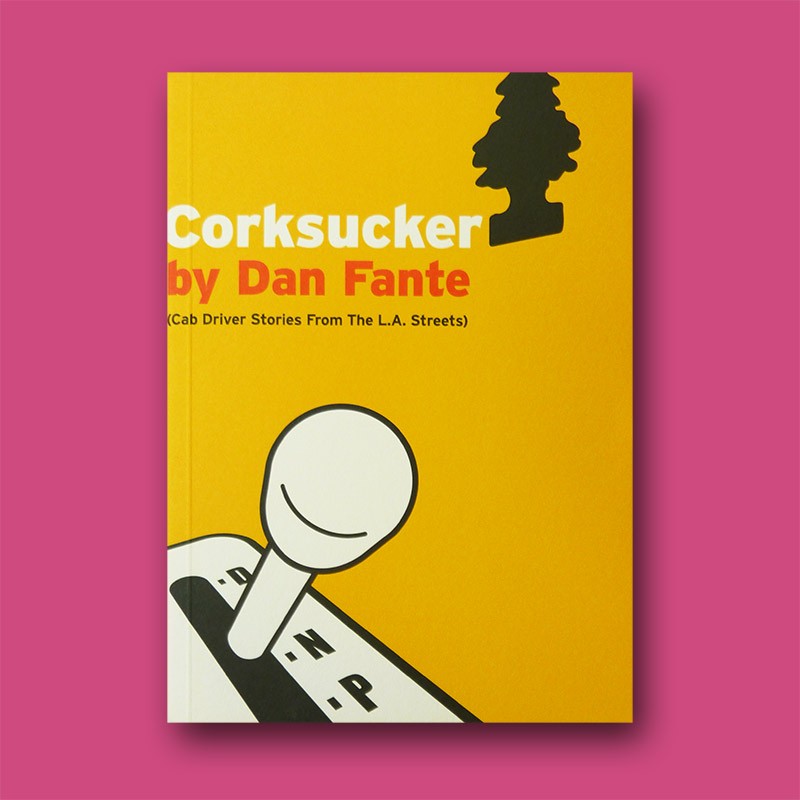 The often mooted comparisons between Dan Fante and Charles Bukowski are often applied lazily by reviewers who cannot see past their most superficial connection – namely booze. But where Bukowski's novels were bawdy and full of macho bravado intercut with rare moments of the old mans vulnerability, Fante's books have been a much darker proposition altogether. They map out a more dangerous territory, the internal seven circles of despair: there is no romanticism of the bottle in 'Chump Change,' 'Mooch' or 'Spitting Off Tall Buildings,' just a pure, unrestrained account of alcohol as a vengeful, angry mistress and bulletins from the front line by a man at war with his own mind. However, there is now one way in which Fante and Bukowski inhabit the same literary world – both men have proven themselves to be master craftsmen of the novel, poem, and with the release of 'Corksucker,' the short story.

The thread connecting the tales in 'Corksucker' is the years Fante spent as a cab driver and self loathing alcoholic in the pitiless sunshine of Los Angles. All of the anger and rage of the novels are here, yet the format of the short story allows him to shift focus away from Fante as anti-hero and focus on the bizarre and damaged characters who come in and out of his orbit: the sad, petty, spiteful alcoholic doorman known as Wifebeater Bob, the beautiful, grief-crazed, tragic Mrs. Randolph and most memorably the smacked-out, fast talking, amoral Libby who along with his girlfriend Niggabitch and their insatiable pet boa constrictor form the nucleus of one of the collections stand out stories – the outrageous, ghoulish black comedy 'Princess.'

For me, finding the writings of Dan Fante was a revelation; in an era were safe writing and intellectual cowardice rule with an iron fist his books are a blessed anachronism. I'm not sure that 'Corksucker' will bring Fante the success and recognition he so richly deserves, but in the US at least if you are unwilling to vomit out tame, soulless garbage and wait for Oprah Winfrey to champion your cause in her 'book club', then success is very much a private party… Sadly most of the readership suited to Fante's work prefer their idols dead: petrified in wax, given a sense of context by a neat biography featuring a suitably tragic ending, and with forewords written by academic and historians. That leaves Fante to keep writing his brutal, terrifying books safe in the knowledge that someday soon he will be looked upon as the only relevant, honest and genius-possessed writer in America, 2005…

As Burroughs put it in an article on Kerouac (and I am paraphrasing from memory here, a memory shot to pieces by long periods of pummeling my mind with narcotics, so be patient):

“Writers are either bullfighters, who risk all for art… or bullshitters, who make fake passes in an empty ring. To be a Writer, one must risk getting gored in the process…”

Fante is a perfect illustration of what it is to be a writer, instead of just someone who writes.

“A running commentary on the truth behind Los Angeles' gleaming façade – a life of brief encounters, desperation addiction and the chasm-sized distance between people – Corksucker digs into the dark landscape of the real America. In eight brutally-honest short stories Dan Fante takes the traditional cab driver 'knowledge' to a deeper place fuelled by raw emotion, wine guzzling existentialism and fleetingly hopeful poetic epiphanies. Here, the City of Angels' halo has definitely slipped…” Ben Myers – Author of The Book of Fuck

“I can describe Dan Fante's work in one word… sublime.” – Soud-Ouest, France

“The Fante's, father and son, have been a great new discovery for me in these last few years.” – John Fowles

“Fante's style is raw, insightful, and deftly realised.” – Time Out

“…writing that is a violent lyrical blizzard….” – Uncut